Beware: “We don’t have a blame culture – which is good news for Tibor!”

This post is a warning to people who are interviewing for a job and when they ask about the culture they are told how “open and collaborative” of is. Or how it “fosters innovation” but then when you ask about blame culture you get the response “we don’t have a blame culture – which is good news for Tibor!”

This is a strong indication of the worst kind of blame culture – one which seeks to demean and subjugate without any chance for the person to defend themselves. The statement above labels Tibor (a Simpsons reference *1) and makes it clear that you think that whatever happened is his fault but of course you are “joking” so if he were to speak up and defend himself he would simply be lacking in a sense of humor as well as being at fault.

Beware this sort of culture within an office as you can and, most likely will, one day take Tibor’s place as the office whipping boy and if you ever seek to defend yourself then you simply “don’t get the joke”. 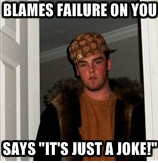 Even Scumbag Steve judges you for this behaviour.

If you work in a leadership capacity in an office which operates this sort of “no blame” culture then you should seek to change it. If you start to hear blame being casually dressed as a joke then you must question where it has come from and if it is purely a joke explain to whoever said it what a joke actually is!

A more productive kind of “no blame” culture is one where people are expected to take responsibility as a team for the things they do. If a problem occurs then EVERYONE fixes it. People should take responsibility of or their failures but mostly they should be praised for fixing their failures. They’ll feel embarrassed but at the same time they should feel supported and carried through by the camaraderie of the whole team pulling together to become something stronger than the sum of its parts.